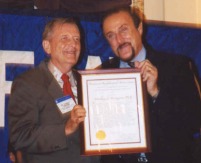 Stanley Krippner, PhD, has held faculty appointments at Akamai University, Fordham University, Kent State University, New York University, Saybrook University, Sofia University, the Universidade Holistica Internacional (Brasilia), the Instituto de Medicina y Tecnología Avanzada de la Conducta (Ciudad Juárez), and the California Institute for Integral Studies, where he holds the position of Affiliated Distinguished Faculty. He is a Fellow in five divisions of the American Psychological Association, and the past-president of two divisions (the Society of Psychological Hypnosis and the Society of Humanistic Psychology). Formerly, he was director of the Maimonides Medical Center Dream Research Laboratory, in Brooklyn, New York, and (earlier) the director of the Kent State University Child Center in Kent, Ohio.

Krippner is a pioneer in the study of consciousness, having conducted research for over 50 years in the areas of dreams, hypnosis, shamanism, and dissociation, often from a cross-cultural perspective, and with an emphasis on anomalous phenomena that seem to question mainstream paradigms. He is co-editor of Holistic Treatment in Mental Health (McFarland, 2020), Integrated Care for the Traumatized (Roman & Littlefield, 2019), The Shamanic Powers of Rolling Thunder (Bear/Inner Traditions, 2016), Working with Dreams and PTSD Nightmares (Praeger, 2016), Varieties of Anomalous Experience: Examining the Scientific Evidence, 2nd ed. (APA, 2014), Mysterious Minds (Praeger, 2010), Debating Psychic Experience (Praeger, 2010), Perchance to Dream (Nova Science, 2009), and co-author of The Voice of Rolling Thunder (Bear/Inner Traditions, 2012), Post-Traumatic Stress Disorder: Biography of a Disease (ABC-CLIO, 2012), Demystifying Shamans and Their World (Imprint Academic, 2011), Extraordinary Dreams and How to Work with Them (SUNY, 2002), Personal Mythology (Tarcher, 1988), and many other books. He has written over 1,200 scholarly articles, chapters, papers, and publications.

Krippner has conducted workshops and seminars on dreams and/or hypnosis in Argentina, Brazil, Canada, China, Colombia, Cuba, Cyprus, Ecuador, Finland, France, Germany, Great Britain, Italy, Japan, Lithuania, Mexico, the Netherlands, Panama, the Philippines, Portugal, Puerto Rico, Russia, South Africa, Spain, Sweden, Venezuela, and at several congresses of the Interamerican Psychological Association. He is a member of the editorial or advisory board for Revista Argentina de Psicología Paranormal, the Journal of Humanistic Psychology, the Journal of Transpersonal Psychology, and the Humanistic Psychologist. He has given invited addresses to the Chinese Academy of Sciences, the Russian Academy of Pedagogical Sciences, and the School for Diplomatic Studies, Montevideo, Uruguay. He is a Fellow of the Society for the Scientific Study of Religion, and of the Society for the Scientific Study of Sexuality.